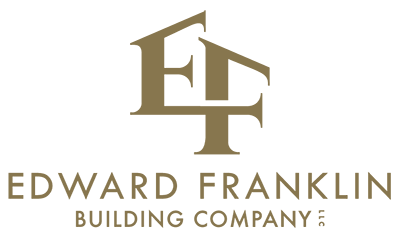 The Westside Collection has been motivated by a single vision – to revitalize historic neighborhoods by introducing newly-built homes that nod towards classic architectural trends while also infusing modern ideas of space, open-concept floor plans, built-in technologies,green building materials, and up-to-date infrastructure into every property. In doing so, our design-build process generates renewed interest in urban and suburban spaces, and provides highly sought after, quality, move-in-ready residences that are still in step with the neighborhood vibe.
The principals of Edward Franklin Building Company both share decades in the Kansas City area- first having grown up in Overland Park. In their early careers, the team worked in custom builds as well as in luxury suburban properties, establishing strong relationships with local architects, designers, and finish contractors along the way. In 2018, a burned down lot in Columbus Park/North End became a chance to collaborate on a new, in-town build. The resulting single family home, built in the brick row home style so prevalent in the neighborhood was the first of its kind to be built and sold in the area for many years. Four more contracts for similar custom, new-construction builds in Columbus Park and another contract in South Hyde Park came in soon afterwards and the Edward Franklin story was off to a roaring start. Since that time, the firm has come to be known by local architects as the resource for modern and historically modern properties in distinctive established neighborhoods.
In addition to their past achievements, Edward Franklin Building Company has worked with nationally renowned Hufft Architecture, and continues to collaborate on historically modern renovations and re-builds throughout the downtown Kansas City area. This is our city too, and our standards for construction, finishes, and aesthetics must first meet our own exacting professional benchmarks before we’re willing to call it an Edward Franklin home. That means everything we do, we do to the level we would if our own families were going to live there.We communicate. We collaborate. We listen. We care. It is that difference that goes into every home in the Westside Collection.
“There is so much energy downtown Kansas City, our goal is to capture that vibe and infuse it into each of our homes, through thoughtful designed spaces with distinct character and charm, truly bringing historical spirit and detail into a modern home. ”
– Grant Baumgartner – Managing Partner

“We love hanging out in KC’s old neighborhoods, experiencing the feeling of homes from 100years ago and seeing the way modern life unfolds in them today. By bringing that spirit to life through quality detail-oriented homes, our aim is to preserve that character for years to come.”
– Chris Ruhl – Managing Partner